New research by specialist insurer Ecclesiastical has revealed the vast majority of brokers (80%) would like to attract younger people.

The survey of 250 brokers1 across the UK found that while they are keen to hire young talent, most (52%) are struggling to recruit those aged 30 and under.
While there is widespread consensus that the industry would like to attract younger talent, the number of younger people entering the market has dropped from 18% in 2015 to 10% in 2017, according to the Insurance Census2.
Nearly half (46%) of brokers surveyed are concerned about a potential talent crisis in the industry. Firms are struggling to attract young talent mainly because young people don’t have the right experience, they don’t have the right skills or qualifications and not enough young people are applying for available jobs.
Recruiting the best talent is a strategic business issue for nearly two thirds of the brokers surveyed (58%), followed by developing new skills to keep up with competition and technological advances (49%), and reaching younger customers (35%).
The three main reasons why brokers are keen to attract young talent is because they believe they will bring new ideas, help with succession planning, and bring new skills. Interestingly, brokers under the age of 45 were more likely (90%) than those aged 46 and over (75%) to want to hire more young people.
Brokers feel the top three strengths of younger employees are their IT skills, their enthusiasm and that young employees are innovative. While their top three weaknesses are verbal communication, literacy and technical knowledge.
Ecclesiastical’s research revealed more than half the brokers surveyed (56%) feel there is a talent shortage because insurance is not seen as an attractive career. Brokers also think young people aren’t entering the market because there is a lack of understanding about what brokers do (27%) and some have a negative perception of brokers (18%).
The data was also backed up by Ecclesiastical’s own conversations with young brokers who suggested young people don’t see broking as an exciting career choice. Oliver Drummond, 26, from BHIB Insurance Brokers commented, “When you’re at a party and say you work in insurance, everyone switches off. But that’s a perception, most people don’t understand what an insurance broker does.”
The young professionals also believed there is a huge lack of awareness about what brokers do and this is preventing young people from choosing broking as a career choice. Stef Boughey, 25, from Towergate Insurance said: “I would not have been aware of broking unless a recruiter had called me. When I visited careers fairs I remember seeing companies such as Jaguar, DANONE, Proctor & Gamble and Deloitte, whereas I never remember seeing insurance companies at careers fairs.” She added: “You can’t attract people unless they know about it.”
Brokers are working to turn the tide. Almost half (48%) said they offer apprenticeships or graduate schemes to attract young people, and just over 40% use social media to reach out to potential candidates or promote their company purpose or ethos. When it comes to retaining the best young talent, two thirds said they had set up defined training programmes, company benefits (52%) and flexible working (43%).
So what more can be done to attract more young talent into the industry? The brokers surveyed suggested that in order to attract more young brokers we should educate young people at school/college about the industry (33%) and do more with the media to change the image of the industry (21%).
Respondents also suggested trade organisations can help through better promotion of insurance as a career (82%), raising the profile of brokers more widely (79%), and investing in learning and development (74%). This is a priority for organisations such as BIBA and the CII which have made a commitment to attracting and nurturing young talent from classroom to boardroom. This includes the development of the general insurance apprentice standard, where apprentices can earn while they learn.
Commercial director at Ecclesiastical, Adrian Saunders, said: “Our research shows the vast majority (80%) of brokers would like to attract younger talent, yet most are struggling to hire younger people.”
“A day in the life of a young broker is far more varied than people might expect. We spoke to a number of young professionals who said every day is different and presents new challenges – from talking to clients and insurers, managing claims through to setting up webinars and taking part in hackathons.”
“The industry needs to evolve and adapt to technological advances and competition from disruptors and younger people have the skills to do this. Tech savvy young talent can bring fresh ideas and new ways of thinking, so it’s vital that we do more to promote the diverse and exciting career opportunities available to young people in the insurance industry.”
**Ends***

1Independent research company FWD on behalf of Ecclesiastical. 250 brokers were interviewed by telephone in August 2018 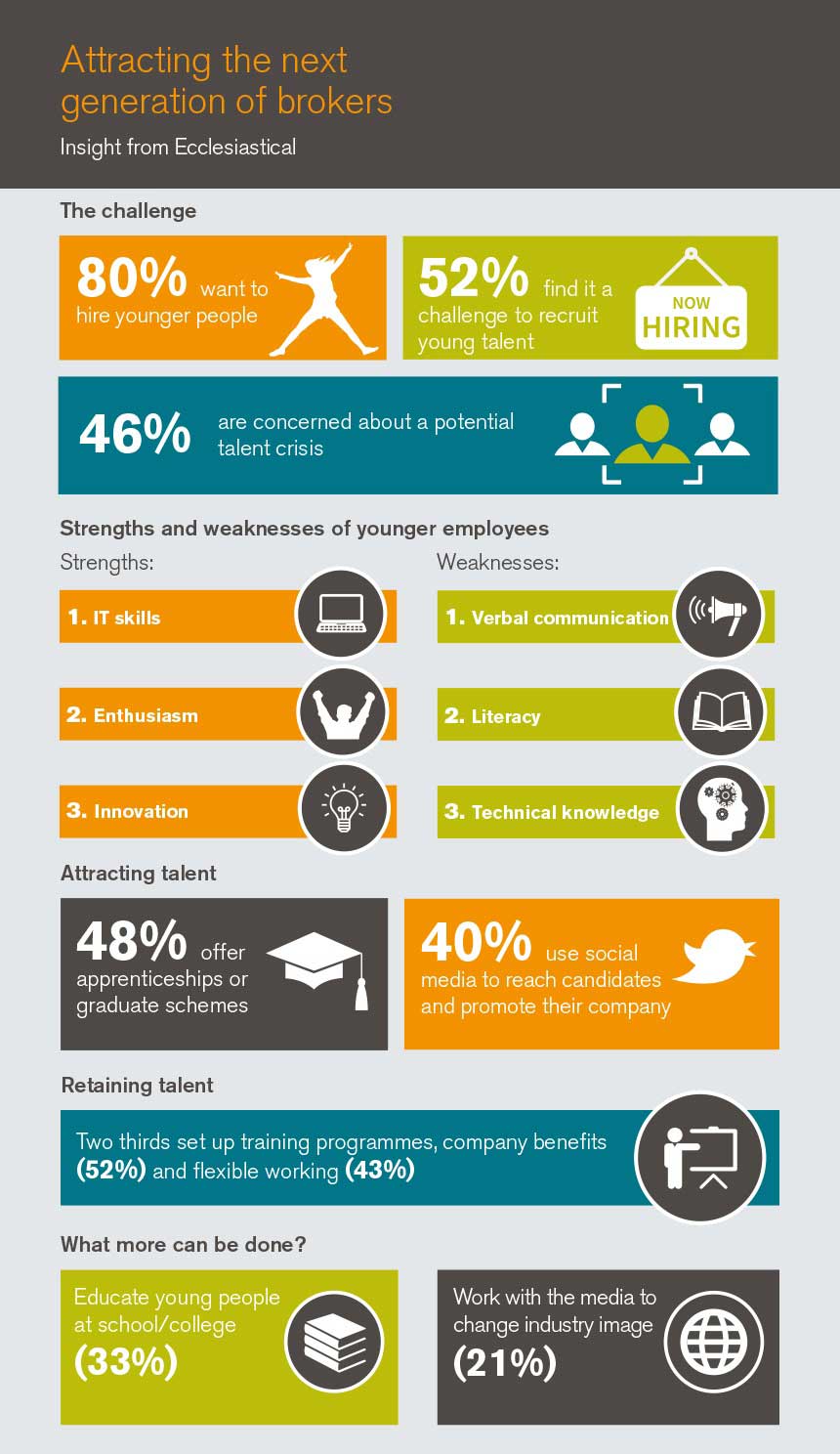 New research from Ecclesiastical Insurance and the Benefact Group has revealed 61% of brokers still intend to donate to charitable causes despite the increase in the cost of living crisis.

Fundraising for your church's everyday costs

Top tips into how you can better secure funding for your church's essential day-to-day costs.

More information for Fundraising for your church's everyday costs

Thousands of tulips line the streets of cities across the UK thanking brokers and the public for supporting charitable causes.