Moving away from school playground exchanges, parents and pupils are increasingly hiding behind social media platforms to criticise or send abuse to teaching staff. 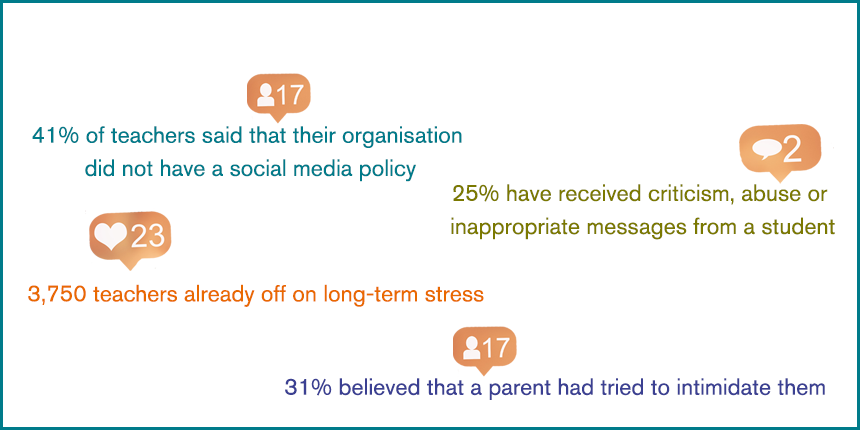 New research from Ecclesiastical reveals almost a third of teachers (29%) have been contacted by parents through a social media channel and, of those, a third (31%) believed that a parent had tried to intimidate them using social media.1
With the proliferation of social networking platforms, our research looks at the emerging issue of criticism via social media and the potential impact it can have on the mental health of teachers.

Social media can be used to an advantage in an educational context by building a sense of pride in pupils through showcasing great pupil group projects, for example.
Increasingly though, the negative side of social media is gaining more attention as the technologically savvy use it to replace traditional forms of parent/teacher or pupil/teacher communication.
A worrying extension of this trend is cyber-baiting, where a student baits a teacher to overreact in a classroom setting, and then video the reaction before posting it online in an attempt to embarrass or humiliate the teacher.

These behaviours come at a time when teachers have never been more pressured; teaching unions warn of an epidemic of stress, with higher than ever numbers of teachers signed off on long term sick leave because of pressure of work, anxiety or mental illness.

The way parents interact with teachers is changing

So what can teachers do in this situation?

What can schools do?

Developing a social media policy or code of conduct should be a high priority and there are on-line resources to help with this.
There is free guidance available online for schools, teachers and parents on how to handle cyber-bullying, which includes training and staff development, prevention strategies and ‘a whole school’ approach.” This include:

Is legal recourse the answer?

Ed Henderson, partner at law firm Lee Bolton Monier-Williams added:
“We have experienced an increasing frequency of schools and trusts asking us about parents waging social media campaigns and generally stirring up others via WhatsApp or Facebook groups. We recommend starting with the school’s complaints procedure; identifying a particular person within the school who the parent can communicate with (removing the teacher from the exchange) and, as a last resort, asking a solicitor to write to parents on behalf of the school advising them that their words may be verging on harassment and/or defamation; usually a solicitor’s letter has a significant effect. It is important to document and evidence the steps that were taken in the same way you would for any other complaint.”
At Ecclesiastical, as a specialist education insurer, we acknowledge that the mental well-being of teachers is a big concern for the sector and, as one of the pressures on teachers, the impact of 24/7 contact via social media had not been fully explored.
Our research clearly highlights the extent of the issue, as we remain committed to discussing contemporary topics that affect the sectors in which we operate. Our counselling helpline service is available 24/7 to our policyholders to discuss such issues such as stress, health, anxiety, relationships, depression or bereavement by calling 0345 266 9667.

1 Research was undertaken by OnePoll on behalf of Ecclesiastical Insurance. 250 teachers were surveyed anonymously in October 2018.

Available 24/7 to our policyholders

Call to discuss issues such as stress, health, anxiety, relationships, depression or bereavement

An in-depth research report exploring the immediate and emerging risks in education today.

Looking to the future – what is the likely impact of Brexit on education establishments?

More information for Brexit and education

Support for brokers during COVID-19

More information for Support for brokers during COVID-19